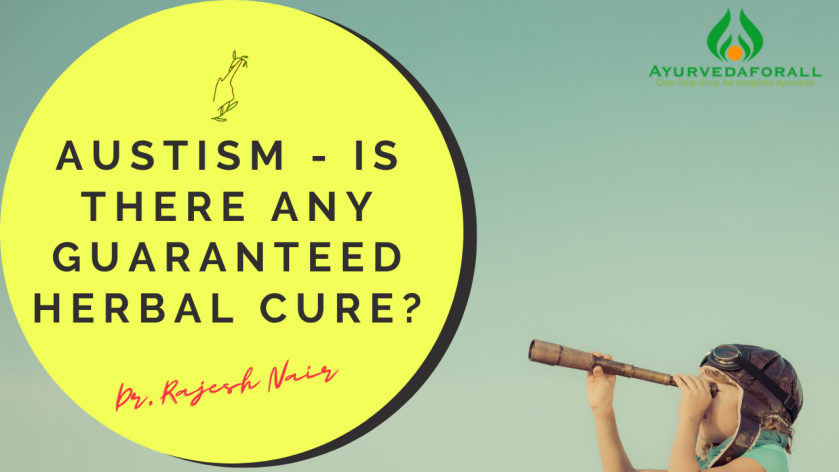 Every child is unique and their developmental patterns are also unique. Accepting an individual with autism is a challenge for many families. Acceptance is crucial and has to begin at home and should extend to the society.

Autism is coming under the broad range of conditions challenges with social skills, repetitive

behaviors, speech, non-verbal communication, etc. Autism Spectrum Disorder (ASD) is the new semantic for Pervasive Developmental Disorder (PDD). ASD is characterized by severe pervasive impairment in several areas of development including deficit in reciprocal, social-emotional functioning, atypical language and communication, and unusual behaviors including stereotypic behavior and or restricted interests. It is often accompanied by sensory sensitivities, medical issues like gastrointestinal disorders, seizures, sleep disorders, anxiety, depression, attention issues, etc. But some people with autism show extraordinary skills in the field of music, arts, maths, etc… Every child on the autism spectrum has unique abilities, symptoms, and challenges. Two kids with the same diagnosis may look very different when it comes to their abilities and behaviors. Autism is central to ASD and is developed before 30 months of age and is common in boys. (Boy : Girl= 5:1). The signs and symptoms start at the age of 2-3.

The following criteria are used for diagnosis

i- A total lack of responsiveness to people

In USA prevalence is approximately 1 in 88, whereas in South Korea it is as high as 1 in 38

children. In India, the prevalence rate is 1 in 250. Currently, India appears to be having 10 million people with autism.

No exact cause is not yet identified, but some hypotheses pointing towards its cause are given below. A strong biologic basis with minimal contribution of psychological factors is noticed.

2. Neurologic theory- Damage to reticular formation of brain stem about the 5th week of intrauterine life.

Cardinal features of autism are three in number

The associated features of autistic are also listed below

Diagnosis is clinical, guided by the application of diagnostic tools (screening, diagnosis,

Diagnostic tests- No tests are confirmatory

A multidisciplinary team approach is needed

Autism is a neurological disorder that affects communication and behavior. Even though one cannot find a disease called Autism mentioned in Ayurveda texts, this is a disease that can be managed and controlled very well if treatment is started from a very early stage by following an ayurvedic regime. If followed properly as prescribed, the patient will be able to live well and progress in life without requiring anyone’s assistance.

Reasons for the cause of autism according to Ayurveda

Although specific reasons cannot be assigned for the cause of Autism, there are a few factors that are said to play a big part in causing the disease. These include:

Whatever the reasons for the disease, when it is caused, it fundamentally affects the digestive system. This is validated by the Gut-Brain Theory that is being put forward by the modern medicine stream. The symptoms caused due to the presence of toxins in the body are also seen in such diseases. The progression of the disease is observed to be based on the toxins and impaired digestion.

General weakness ( Ojasakshaya) symptoms which affect the seven tissues in the body is seen in such patients along with other symptoms.

The following are the symptoms of being in Ojasakshaya:

The other symptoms of the disease affecting the Samgnanavaha Srothas are the following:

The reason for autism, like in all other diseases, is mainly due to improper functioning of the gastrointestinal tract in the digestive system.  In other words, Mandagni (slow digestion) causes vitiation of the doshas leading to the manifestation of the disease and its progression if it is not treated in time. The damaged digestion caused due to the external and internal reasons mentioned above becomes an impediment for the various tissues and parts of the body not getting the required nourishment. This, in turn, impedes the proper functioning of various parts of the body.

The damaged digestive system thus is unable to ward off the poisonous toxins in the body and produce the nourishing fluid causing impediments in all the critical pathways in the body. This also prevents the production of Ojas which is the main substance that supports the proper functioning of bodily tissues and the immune system. These reasons cause the malfunction of the various systems in the body like blood flow channels, enzyme and hormone production, the conveyance route of the nerves, etc.

The functioning of the system whose pathways are impaired thus becomes dysfunctional. This causes these children to exhibit various symptoms.

The treatment will be based on three factors:

Food has to work as a medicine. Hence it is very important to give special attention to the food. It has been found that some aspects of food cause difficulties in children with autism, especially substances like gluten, casein, etc. which are commonly found in food.

The following have to be taken care while giving food:

Food ingredients to be avoided:

Food ingredients that can be used:

Medicines that are given:

The asanas that could be practiced:

Even though it is a very complicated situation to handle, early diagnosis and immediate and correct treatment will separate the pathology of the disease and help in bringing the patient back to normalcy. Food and lifestyle changes are equally important as medicine in Ayurvedic treatment. The effectiveness of the treatment will improve further if this is augmented with occupational therapy, yoga, behavioral therapy, speech therapy, support of the parents, relatives, and society.

Treatments that help in brain development by making the Dhahanvyavastha accurate may be unknown to modern science but are plenty in Ayurveda. The correct use of these present golden rays of hope to patients who are affected by autism.