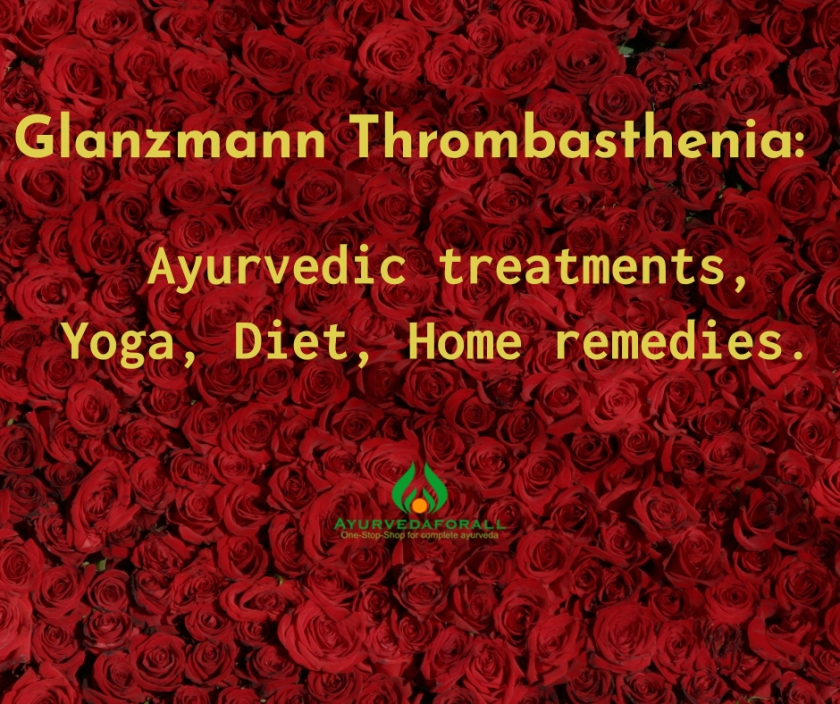 What is Galnzmann’s disease or Glanzmann Thrombasthenia

It is an abnormality of the platelets. It is an extremely rare coagulopathy (bleeding disorder due to a blood abnormality), in which the platelets contain defective or low levels of glycoprotein IIb/IIIa (GpIIb/IIIa), which is a receptor for fibrinogen.

It is a congenital hemorrhagic disorder, means a disorder, which is present from the time of birth.

Platelets are small blood cells that are the first responders in the case of a cut or other bleeding injury. They normally clump together to form a plug in the wound and stop bleeding.

Without enough glycoprotein IIb/IIIa, platelets won’t be able to stick together, or clot, properly. People who have Glanzmann’s disease have difficulty getting their blood to clot. Glanzmann’s disease can be a serious issue during surgeries or in the case of major injuries because a person could lose large quantities of blood.

Bleeding disorders are collectively called as Raktapitta in Ayurveda.

The intake of Ushna (warm), Theekshna (penetrative), Kadu (hot), Amla (sour) Lavana (salty)and Vidahi ( causing internal burning sensation) foods in excess leads to the vitiation of Pitta and  Blood (Rakta) and the vitiated blood together with Pitta flows out from the circulating paths and results in excessive bleeding through nose, eyes, ears, mouth, penis, vagina or anus and even through the hair follicles.

Ayurveda texts specifically mention that  the garbha charya of mother while conceiving a baby or during the Maithuna ( sexual intercourse) can even lead to some serious disorders in the new born-which can be remembered here as  Glanzmann’s disease is a congenital disorder and there is no specific etiology for it other than the mutation of the gene. And also, Raktapitta is bleeding without trauma or internal injury. Even Sushrutacharya does not mention trauma in the etiology of Raktapitta.

Mutations in the ITGA2B or ITGB3 gene cause Glanzmann thrombasthenia. These genes provide instructions for making the two parts (subunits) of a receptor protein called integrin alphaIIb/beta3 (αIIbβ3). This protein is abundant on the surface of platelets. Platelets are small cell fragments that circulate in the blood and are an essential component of blood clots. During clot formation, integrin αIIbβ3 helps platelets bind together. Blood clots protect the body after injury by sealing off damaged blood vessels and preventing further blood loss.

ITGA2B or ITGB3 gene mutations result in a shortage (deficiency) of functional integrin αIIbβ3. As a result, platelets cannot clump together to form a blood clot, leading to prolonged bleeding.

Some people with Glanzmann thrombasthenia do not have an identified mutation in either the ITGA2B or ITGB3 gene; the cause of the disorder in these individuals is unknown.

This condition is autosomal recessive. That means both parents of the victim must carry the defective gene or genes for Glanzmann’s in order for him or her to inherit the disease. If there is a family history of Glanzmann’s disease or related disorders, there is an increased risk of inheriting the disorder or passing it on to the children.

Doctors and scientists are still researching what exactly causes Glanzmann’s disease and how it can best be treated.

Glanzmann’s disease may cause severe or continual bleeding, even from a minor injury. People who have the disease may also experience:

The severity and frequency of the bleeding episodes in Glanzmann thrombasthenia can vary greatly among affected individuals, even in the same family. Spontaneous bleeding tends to become less frequent with age.

Together with the excessive bleeding from different body outlets,, the patient will exhibit the following symptoms:

4. Dhoomaka (feels like he body is exposed to extreme hot weather)

Glanzmann thrombasthenia is estimated to affect 1 in one million individuals worldwide but may be more common in certain groups, including those of Romani ethnicity, particularly people within the French Manouche community.

Glanzmann disease is a lifelong condition, and there is no cure.

Ayurveda has a specific prognosis for diseases along with the treatment line.

Ayurveda specifies that only those bleeding disorders( Raktapitta) which occur through the nose, eyes, ears, and mouth which occurs to Balavan( healthy individuals with good immunity)can be cured.

Adhoga raktaputta(excessive bleeding through anus, penis or vagina)can be just maintained with medicines and good diet or exercise.

Raktapitta which occurs through all parts of the body and which occurs in Mandagni( people with extremely less digestive capacity, cannot be cured.)

Glanzmann disease is an inherited condition. There is no known prevention.

Modern medicine does not have a  specific treatment for this disorder. Platelet transfusions may be given to people who are having severe bleeding.

It is improper to arrest the emission of blood immediately at the outset of the disease if the patient is healthier with a compatible immune system,such  a procedure can bring an attack of Pandu(anemia), Grahani, Kushta(dermatological disorders), Gulma or Jwara (fever) or Pleeha(spleen enlargement).

These statements have not been evaluated by the Food and Drug Administration, United States. This product is not intended to diagnose, treat, cure or prevent any disease. Please consult your GP before the intake.

Writer:
Dr. Rajesh Nair, the co-founder and chief consultant of Ayurvedaforall.Com, is a graduate of prestigious Vaidyaratnam Ayurveda College (affiliated with the University of Calicut), Kerala, India. Additionally, he holds a Postgraduate Diploma in Yoga Therapy from Annamalai University.

Through Ayurvedaforall Dr. Nair offers online consultation to patients worldwide and has served hundreds of patients over the last 20 years. In addition to his Ayurvedic practice, he is the chief editor of ayurveda-amai.org, the online portal of Ayurveda Medical Association of India, and the state committee member of Ayurveda Medical Association of India.

Dr. Nair is a regular speaker at Ayurveda-related conferences and has visited Germany to propagate Ayurveda. You can write directly to him-
rajesh@ayurvedaforall.com

To give you a quick idea about Ayurvedaforall, we are a group of ayurvedic practitioners committed to propagating Ayurveda in its best tradition around the world. Our online store sells authentic ayurvedic formulations backed by professional advice. Now into the seventeenth year of operation, the site has helped us build a dedicated clientele which regularly uses our products and services as well as refers others to us. Needless to say, this has been achieved through our adherence to the highest standards of customer service and professional ethics.